Leading companies in the financial, tech and telecom sectors have expressed interest in developing a virtual bank business, with the aim of exploring greater opportunities in the digital era.

They believe the proposed virtual bank licensing will lead to an acceleration of innovation in the banking sector and enhanced financial services.

Last week SCB X, the holding company of Siam Commercial Bank, said it was interested in setting up a virtual bank.

The company is keen to apply for a virtual bank licence from the Bank of Thailand, pending the central bank’s publication of the licensing regulations, chief executive Arthid Nanthawithaya said at a shareholders’ extraordinary general meeting.

Earlier Payong Srivanich, president of the state-owned Krungthai Bank (KTB), said the bank has partnered with telecom operator Advanced Info Service (AIS) on a plan to jointly invest in a virtual bank, with the aim of serving both existing and new customers.

Somchai Lertsutiwong, chief executive of AIS, the country’s biggest mobile operator by subscriber base, confirmed that AIS and KTB plan to work together to form a virtual bank.

He said a partnership between a telecom operator and a bank is a perfect model of synergy and capitalisation on digital platforms.

The partnership draws on the strengths of the telecom operator in terms of digital technology, network coverage, innovation and customer services, while the bank provides brand value, a successful track record, and expertise in financial services.

The partnership will serve the new business landscape through cost effectiveness, innovations and cross-industry operations as it needs bank expertise, a smart networking system and data analysis, he said.

AIS has more than 100 staff in the data analytics and science fields, said Mr Somchai, but it needs many more in these critical sectors associated with the virtual bank ecosystem.

He said AIS developed a digital credit rating model through a data analytics system over the past five years.

“We believe every service provider sees this as an opportunity and are considering it,” said Monsinee Nakapanant, co-president of Ascend Money.

The development of virtual banks will lead to the acceleration of innovation in the banking sector and enhance financial services to better serve users, she said.

Virtual banks are expected to be disruptive and expand access to financial services for the underserved population, said Ms Monsinee.

Pisut Ngamvijitvong, senior equity research analyst at Kasikorn Securities, said if Ascend Group joins with Ant Group, an affiliate of the Chinese conglomerate Alibaba Group, to form a virtual banking business, the move would be closely watched by all.

Ant Group is a shareholder of Ascend Group. Both Ant Group and Ascend Group are backed by associated conglomerates that offer products and services linked with people’s daily lives.

“Collaboration between this duo could pose a threat to other virtual banks,” said Mr Pisut.

He said it may take five to 10 years before the virtual bank industry settles in, as the initial requirements are still not fully supportive of the segment because it could pose a real threat to existing big banks.

Regarding news reports that telecom firm True Corporation plans to work with Bangkok Bank to operate a virtual bank business, Mr Pisut said they might collaborate on some business ventures, but not as part of a virtual bank.

He said major banks should instead focus on their comfort zone, rather than help promote new players that could pose a threat to their business. 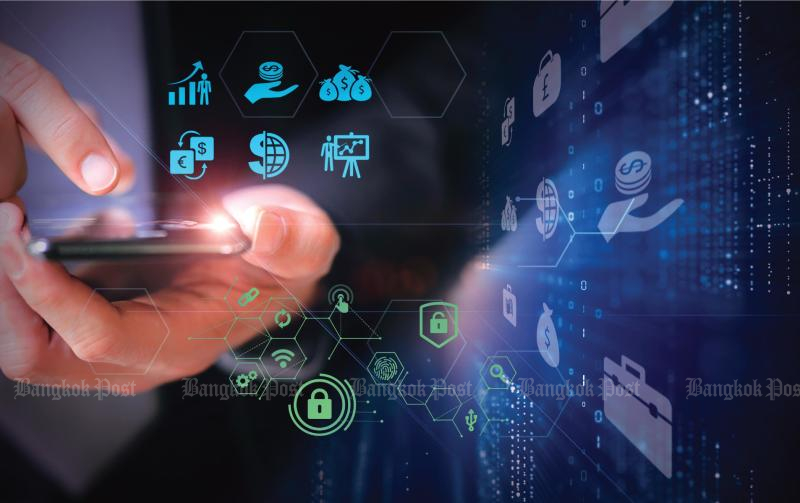 SET-listed Jay Mart, a holding firm engaged in IT retail, finance and technology, has announced plans to pursue a virtual bank business.

The company’s ecosystem includes its subsidiary Singer, a hire-purchase service operator, which it could use to reach out to the underserved segment. Subsidiary JMT Network Services Plc provides debt collection services.

Meanwhile Sea, a tech conglomerate headquartered in Singapore, has also expressed interest in joining the virtual bank fray in Thailand.

Maneerat Anulomsombut, chief executive of Sea Thailand, said the company is assessing the feasibility of a virtual bank before deciding whether to apply for one, but she said the firm is interested in this business in Thailand.

Worachat Luxkanalode, managing director of Grab Thailand, said the company is also weighing whether to apply for a local virtual bank licence.

Grab and Singapore’s telecom firm Singtel formed a digital bank joint venture that was awarded a full digital banking licence in the city-state.

Sakchai Peechapat, chief executive of Tisco Financial Group, the holding company of Tisco Bank, said Tisco has no plans to apply for a virtual bank licence in the first round, preferring to focus on its existing businesses.

Mr Sakchai said Tisco would follow the progress of virtual bank development in the Thai market and might consider applying in future licensing rounds.

The central bank plans to grant up to three virtual banking licences in the first stage of its virtual banking industry development. The regulator opened licence applications to financial institutions (traditional banks and non-banks) and non-financial firms (big tech, fintech and consortiums).

Thanyalak Vacharachaisurapol, deputy managing director of Kasikorn Research Center, said the two business models with high potential and the qualifications to apply for the licences are those based on technology and data-driven approaches.

The first group comprises tech companies or those conducting business on digital platforms, such as e-commerce and telecom.

The second group possesses big data capabilities, including health-related businesses such as insurance and healthcare, or those with data on unserved and underserved segments.

The regulator would like to see innovations from newcomers that serve unbanked and underserved customers in Thailand.

“This is mostly in line with other regulators in the region,” he said.

However, the conditions to become a virtual bank are not simple. Virtual banks need to have at least 5 billion baht as initial capital and must clearly demonstrate to the central bank how their strategies can meet the objectives.

With the high initial level of investment, only big players will apply for licences, said Mr Boonsom. It is also likely the applicants will form partnerships rather than apply as a sole investor, he said.

The Bank of Thailand said it will assess the applicants’ qualifications in many areas, including their financial status. Applicants should have sufficient capital to invest in core systems to launch the service and to ensure sustainable operations, especially during the initial stage of operations, according to the central bank.

The regulator suggested mid-sized companies can partner with other firms to apply for licences.

The central bank said it will consider the qualifications of all applicants under the same criteria.

Mr Boonsom said in his opinion, the central bank may need to reconsider the number of licences issued. Only three licences are projected for the first stage, compared with five licences each in Malaysia and Singapore, seven in the Philippines, and eight in Hong Kong.

Awarding only three licences might create too much competition among the applicants, driving away potential applicants that may not want to compete, he said.

He said based on experiences in other countries, virtual banks that succeed leverage a synergy of their ecosystems and provide innovative products and services to customers.

Mr Boonsom said he does not expect virtual banks to be profitable in a short period of time because of the high initial investment costs and fierce competition with existing financial institutions.

He said based on a preliminary Deloitte study, there is a significant untapped market in Thailand, especially among unserved and underserved customers in rural areas.

Many people in these groups borrow money, similar to other segments. However, they cannot access bank lending, so these groups are likely to borrow from loan sharks, succumbing to extremely high interest rates, said Mr Boonsom.

If virtual banks can access unbanked and underserved clients quickly, they might be able to grow their interest income and make a profit in 4-5 years, he said.

According to the consultation paper, a virtual bank is a commercial bank without a physical branch, and mainly provides a full range of services via digital channels.

The central bank expects virtual banks to offer a full range of services that match the demands of retail borrowers and small and medium-sized enterprises, including the underserved and unserved segments.

The Bank of Thailand does not want virtual banks to pursue irresponsible lending strategies. Moreover, they must not give preferential treatment to related parties or abuse a dominant market position.

The central bank kicked off public hearings for the consultation paper on the virtual bank licensing framework on Jan 12, running until Feb 12.

The regulator plans to finalise the regulations in the first quarter of this year.