EU energy ministers gathering in Brussels on Monday are likely to agree to a limit on gas prices below €200 a megawatt hour, according to the latest proposal for the bloc, in an effort to quell volatile energy prices that threaten to rise again as winter draws in.

The draft document put before ministers, and seen by the Financial Times, sets out a mechanism that would halt gas prices at €188/MWh hour once they had reached that level for three days.

At least 15 EU countries including Spain and Greece have been pushing for several months for Brussels to introduce a cap in the hope of keeping prices down for consumers over the winter and preventing social unrest.

Germany, Netherlands and Denmark are among member states that have remained sceptical about intervening in markets, arguing that lower prices would result in increased gas use and cause traders to send gas elsewhere.

Wholesale gas prices spiked to all-time highs above €300/MWh — the equivalent of more than $500 a barrel in oil terms — over the summer after Russia cut supplies through its largest route to western Europe, the Nord Stream 1 line to Germany.

The suggested cap would cover gas derivative contracts traded on Europe’s benchmark TTF index for supplies one month to one year ahead.

This marks a shift from the European Commission’s original proposal that suggested a limit would trigger when prices for month-ahead TTF contracts hit €275/MWh for 10 days — so high that it would not have come into play during the record prices over the summer.

Month-ahead gas prices on the Netherlands-based benchmark were trading around €112/MWh on Monday.

Konstantinos Skrekas, Greek minister for energy and environment, said on arrival at the meeting that a price cap of €188/MWh “will give the right signals to the market”, but also said that “any rate” between €150 to €200/MWh “would work”.

A paper sent by 11 EU capitals including Greece, Belgium and Poland to other member states at the weekend, and seen by the Financial Times, proposed a cap activated when prices reached €160/MWh for three days and €20/MWh above an average of global liquefied natural gas prices.

Monday’s meeting is the last chance for the ministers to find an agreement on one of the EU’s most divisive pieces of energy policy this year.

German chancellor Olaf Scholz, who has been consistently sceptical about a gas price cap, signalled after a summit of EU leaders on Thursday that Berlin could be open to a deal. “On the side of the conference . . . there were some proposals that sounded like a good solution,” he said.

To placate Germany, the Netherlands and other countries wary about a cap, several safeguards have been inserted into the regulation that make the ceiling quicker to remove should there be concerns about gas shortages in the EU. 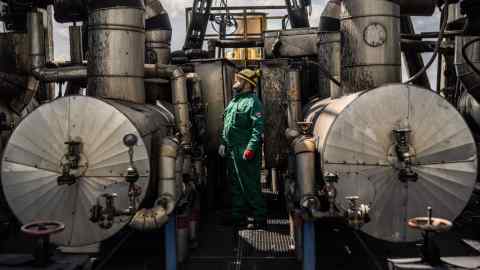 Traders and market operators fear that any sort of intervention such as a cap would increase volatility and force traders into unregulated over-the-counter trades.

ICE, which operates the TTF, warned on Thursday it might pull operations out of the EU if a cap was introduced.

Kadri Simson, the EU’s energy commissioner, said she “strongly” believed the deal was within reach but added that it would require “a very strong spirit of compromise from everyone”.

Jozef Sikela, the Czech energy minister chairing Monday’s meeting, said he believed “the figure [for the cap] will start with one”.

Homebuilder sentiment drops for the 12th straight month, but a bottom may be near