Personally, I’m starting to wonder whether one rich guy deciding what everyone’s allowed to say is the path to a free speech utopia. The framework before wasn’t perfect, but now a single man with particularly thin skin is making up rules for Twitter and banning people for breaking them shortly after.

More than that, though, Elon Musk has a lot on the line here as a businessman. It’s not just that his net worth has taken a hit, or even that buying Twitter at a valuation of $44 billion was historically bad business. Musk tried to get out of the deal at every turn, and that makes perfect sense: Twitter is not worth $44 billion. That’s the result of a 2014-vintage joke Musk thought was funny. As everyone well knows, the fundamentals of Twitter as a business have been bad for a long time. Significantly overpaying on what may already have been a generous share price, while leveraging a ton of debt on top that has now created $1.2 billion in obligations to your creditors this year, does not constitute sound business fundamentals. Neither does scaring away advertisers who provide the lion’s share of your revenue, while instituting a subscription model that—even if it goes gangbusters—won’t fill the hole in your budget. Even before Musk took a machete to the ad revenue, Twitter’s cash flow came out to $1.1 billion a year—$100 million less than the debt obligations alone.

Which brings us to what Musk has on the line beyond the fundamentals: his reputation as a generational business genius, which has always counted for more than fundamentals. A year ago, in the halcyon days when he was purportedly worth $250 billion, Tesla’s valuation was bigger than the next five automakers combined. Toyota, Ford, GM, Volkswagen, Mercedes-Benz—the market told us they all paled in comparison to Tesla, even if they put their rings together like Captain Planet. Exactly two years ago, CNBC reported that Tesla’s valuation was bigger than the next nine automakers combined at a time when “Tesla expects to sell at least 500,000 electric vehicles this year worldwide, making up less than 1% of total vehicle sales.” It doesn’t take a generational business genius to deduce that Tesla’s valuation was not tied to its performance but to the prospect it would someday dominate the auto market. And this projection was in turn tied to the notion that Musk would outperform the leaders of other automakers through his visionary genius. 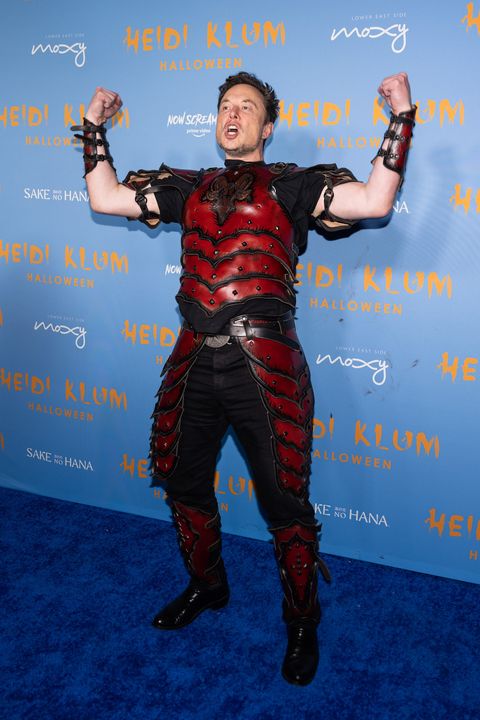 Let’s just say, hypothetically, that Musk didn’t believe Tesla was worth more than the next five automakers combined.

To be clear, we should thank him for making electric cars cooler than the Prius. He’s done well since Tesla got liftoff thanks in large part to some 2009 stimulus money. But investors have already shown they’re spooked by Musk’s shift of focus to Twitter, and Tesla shares are currently down 51% over the last year. This could be temporary if Musk gets his act together. But if this whole episode shatters the perception that he is a singular visionary business genius, that is a far more extensive problem. It doesn’t help that Musk has sold off close to $40 billion in Tesla shares over the last year, reducing his stake in the company from 17% to 13.4%. (Put another way, he offloaded a bit less than a quarter of his holdings.) It continued this week as he sold another $3.4 billion, and the reception was no bueno: “The Twitter nightmare continues,” investment analyst Dan Ives wrote in a report Thursday cited by Barron’s, “as Musk uses Tesla as his own ATM machine to keep funding the red ink at Twitter which gets worse by the day as more advertisers flee the platform with controversy increasing driven by Musk.”

Musk’s real motive(s) for selling stock at various points is unknowable. He was selling well before there was any suggestion he would buy Twitter, he was selling after he agreed to the deal (and was trying to get out of it), and he’s sold after all the financing for the deal was already sorted. Maybe right now he is indeed selling to feed the money into Twitter to shore up its finances. In the past, he was reportedly selling to exercise Tesla stock options (some of which he did exercise) and pay taxes on those options. He would have been taxed on his capital gains on the stock, as well as the spread between his “strike price” on the options as part of a 2012 compensation agreement ($6.24 a share) and the market price at the time (upwards of $1,000 a share). Even if he did get killed on taxes, he was coming out way ahead.

But a year ago, he also conducted a poll—on Twitter, naturally—asking if he should sell 10% of his Tesla stock. He suggested it was a response to public outcry over tax avoidance among people, like himself, whose wealth was tied up in “unrealized gains”—stock they hold onto and don’t have to pay taxes on. After the “yes” option won, he did indeed sell stock, though it’s hard to believe he actually made this decision because of a Twitter poll.

Much is made lately of unrealized gains being a means of tax avoidance, so I propose selling 10% of my Tesla stock.

Do you support this?

Note, I do not take a cash salary or bonus from anywhere. I only have stock, thus the only way for me to pay taxes personally is to sell stock.

One possible explanation for some of the sales is that Musk himself did not believe Tesla’s valuation a year ago was realistic or sustainable. Again, we cannot know what was in his mind, but did he really believe it would outperform all those competitors collectively? Particularly when those competitors currently have much larger production capacity and would soon enough get into the electric-vehicle space with their economies of scale? Maybe he really did believe Tesla would vanquish all comers. But hypothetically, if he didn’t believe Tesla’s valuation, that would mean he also didn’t believe his own net worth according to the Forbeses of the world. Almost all his wealth on paper was in the form of stock—unrealized gains—and ProPublica has detailed how he financed his lifestyle with loans against those holdings: “[In 2020], Tesla reported that Musk had pledged some 92 million shares, which were worth about $57.7 billion as of May 29, 2021, as collateral for personal loans.”

Even if most of the stock he’s sold in the last year (a period when the share price was cut in half) went towards his commitments in the Twitter deal and buying Tesla stock options, that’s compatible with the theory that he thought Tesla was overvalued. If he’d successfully extricated himself from buying Twitter, he’d have had billions more in proceeds from the stock sales (purportedly earmarked for financing the deal) in his pocket. Stock options offered him a way to buy Tesla stock at a much lower share price than the current market rate, much less what it was a year ago. He’d have paid a bunch of taxes on the options and still come out ahead.

And if he declined to reinvest some chunk of the proceeds from his $40 billion in sales, then a lot more of his wealth is real now—in the form of billions of actual dollars under his control. Rather than the unrealized gains he took out loans against, he has actual cash. Let’s say the altruistic motive he provided in that Twitter poll, to pay some taxes as a kind of public service, was genuine; he still keeps a bunch of cash that used to be stock. And all the while, there have been very few news cycles focused on how Elon Musk, who once proudly declared he’d be “the last one out” of Tesla, is offloading billions and billions in stock. Most of the news has focused on his shenanigans with Twitter, or his beef with Elizabeth Warren, or his increasing turn toward far-right politics. If this all seems too cynical a reading, consider that he once misled the public (on Twitter) that he’d secured funding to take Tesla private at an inflated share price (a $420 joke, again), causing a 6% spike in the market price. He was sanctioned by the SEC and forced to step down as chairman of Tesla’s board.

If Musk didn’t believe Tesla’s valuation a year ago, that would reinforce his status as the paragon of the 2010s Hype Economy, when enigmatic figures in tech feasted on the perception they were making the future—on cheap money, amid low interest rates—to amass great wealth in the form of stock they controlled. It’s true of Twitter, too: its value has always seemed untethered from such metrics as “revenue” and “expenses.” Whether or not he ever intended to entangle himself with Twitter, this entanglement could change the perception of Musk in a far wider context. It won’t break him financially, though: he may now have billions of dollars in cash he didn’t have a year ago.

Jack Holmes is a senior staff writer at Esquire, where he covers politics and sports. He also hosts Useful Context, a video series.


Read More: Elon Musk’s Twitter Troubles May Pop the Balloon of His Reputation as a Genius Visionary