Inside The Colossal Empire Of Gautam Adani

Sixty-year-old Gautam Shantilal Adani, popularly called Gautambhai, gets energised by writings on ‘resilience’. This Gujarati entrepreneur recently stumbled upon a write-up by Martin Seligman, dubbed the ‘father of positive psychology’. In the write-up, the American psychologist narrated that he mastered the power of optimism “the long, hard way, through many years of research on failure”. He discovered that resilient people have the stomach to see failures as transitory. Adani, a college dropout, also believes that failure isn’t fatal. “I am an incurable optimist,” he often says to people close to him. His perseverance and determination to succeed have made him what he is today—the world’s third-richest person.

In the 1980s, when fellow Gujarati Dhirubhai Ambani, the founder of Reliance Industries Ltd (RIL), was displacing the oldest and wealthiest business families from their perches, Adani landed in Mumbai to try his hand at diamond trading. He soon founded and listed his first commodity trading firm, Adani Exports. In 2002, when Mukesh Ambani was elevated as RIL Chairman after Dhirubhai Ambani’s death, Adani Exports was a relatively inconsequential player, with Reliance’s market cap 73 times higher. Today, companies of the Adani Group have cobbled up a valuation of Rs 19.31 lakh crore, as of November 18, surpassing that of RIL by Rs 1.84 lakh crore. In terms of average annual market cap between October 2021 and September 2022 (the BT500 study period) though, RIL pips the Adani Group to the top spot; RIL’s market cap is Rs17 lakh crore, while the Adani Group’s is Rs 13.72 lakh crore. The battle for market cap supremacy may still continue, as RIL has a few diamonds in its wardrobe. But then, so has Gautambhai. The high growth potential of his listed entities is reflected in the BT500 ranking (see box ‘A Story in Numbers’). The Adani Group’s current market cap is already higher than the GDP of countries like Ukraine and Sri Lanka. Only the rapid rise in market cap of new-age Amazon, Google and Facebook come close or, back home, giants like HDFC Bank and TCS.

Adani is positioning his group as a leader in infrastructure. Given India’s underdeveloped infrastructure, the decision was shrewd. And the execution, exceptionally successful. “They have not gone bankrupt, unlike their peers (Jaypee, Lanco, etc.),” says Vinit Bolinjkar, Head of Research at Ventura Securities. Partly, the financing strategy of using bonds instead of short-term bank loans has helped.

When Adani started his entrepreneurial journey, he had the support of younger brother Rajesh (currently MD of Adani Group), who was good at building business relationships. The business philosophy has always been to capture the entire value chain. For instance, it started as a coal trader and later did backward integration by acquiring mining operations. At the same time, it did forward integration into ports, logistics, thermal power and renewable energy, transmission, and city gas distribution. Over the years, the flagship Adani Enterprises Ltd (AEL) has churned out unicorns like Adani Transmission, Adani Power, Adani Ports, Adani Green, Adani Total Gas and Adani Wilmar (see box ‘Adani’s Empire’). Malay Mahadevia, Adani’s close associate, played a key role in the group’s success.

As part of its backward integration strategy, AEL also acquired a coal mine at Carmichael Basin in Queensland, Australia, a decade ago. But mining was delayed because of protests by environmental activists. The coal dispatches commenced this February with a mining capacity of 11 million metric tonnes (MMT). AEL has also incubated new businesses in sectors such as the green hydrogen ecosystem, solar, airports, roads & highways, data centres, defence & aerospace, and water. The strategy is to nurture new businesses until they are ripe for unlocking value in public markets (see box ‘Ready for Unlocking’). 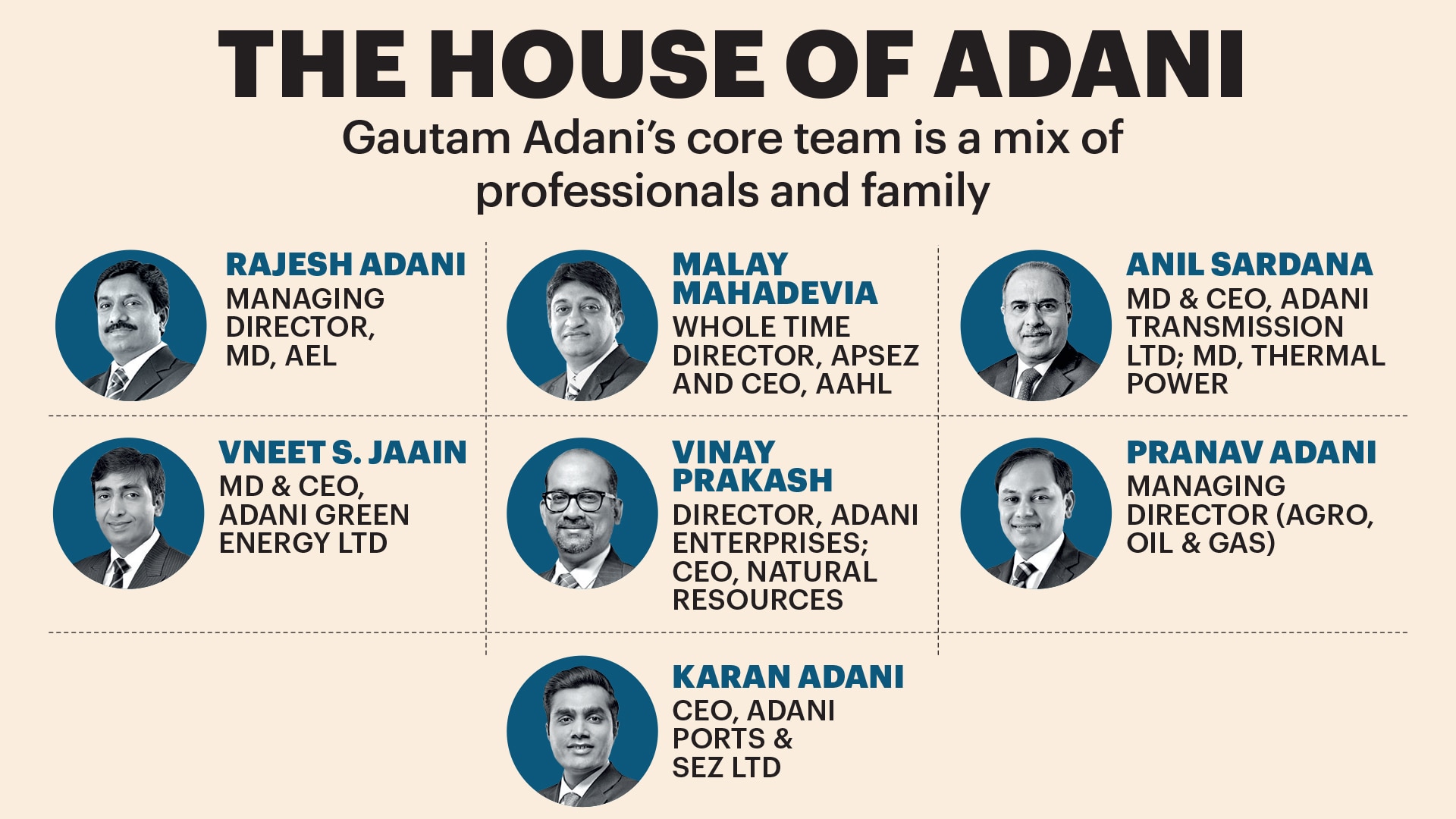 Adani is betting big on the energy value chain, from renewables, thermal power, gas distribution, to transmission and distribution. Backed by French giant TotalEnergies with a 20 per cent stake, Adani Green Energy Ltd (AGEL) has emerged as one of India’s largest renewable energy developers, with a portfolio of 20 GW-plus spread over a dozen states. Six years ago, it had only 0.3 GW. That explains the company’s high price-earnings (P/E) multiple of 644 times. Currently, 6.7 GW is operational with cash flows secured through PPAs (power purchase agreements), and 13.7 GW is under construction. The man executing the green energy project is group veteran Vneet S. Jaain.

In thermal power, Adani Power Ltd (APL) is India’s largest private power producer (with a capacity of 12,450 MW). The third energy arm is Adani Total Gas Ltd (ATGL), where TotalEnergies has a 37.4 per cent equity stake. ATGL is developing city gas distribution networks to supply piped natural gas (PNG) to the industrial, commercial and residential sectors; and compressed natural gas (CNG) to the transport sector. The rising usage of CNG has given this company a P/E multiple of 824 times, the highest in the group. Adani Transmission Limited (ATL) has a network of 18,795 circuit km (ckm), up from 6,950 ckm six years ago. Currently, 15,003 ckm is operational. This business is helmed by ex-Tata Power honcho Anil Sardana, who is the MD & CEO.

In transportation, ports was the first big foray into forward integration to support its trading business. In a little over a decade, Adani Ports and Special Economic Zone (APSEZ) has expanded from a single port to a dozen ones, becoming India’s largest private sector port operator with 312 MMT of port cargo throughput in FY22, with a 30 per cent market share. “We are well on track to achieve 500 MMT by 2025,” said Karan Adani, CEO, and Adani’s elder son, at an investor call this November. Apart from ports, it has a 4,000-hectare SEZ in Mundra, a free trade warehouse zone, and a land bank of 12,000 hectares. 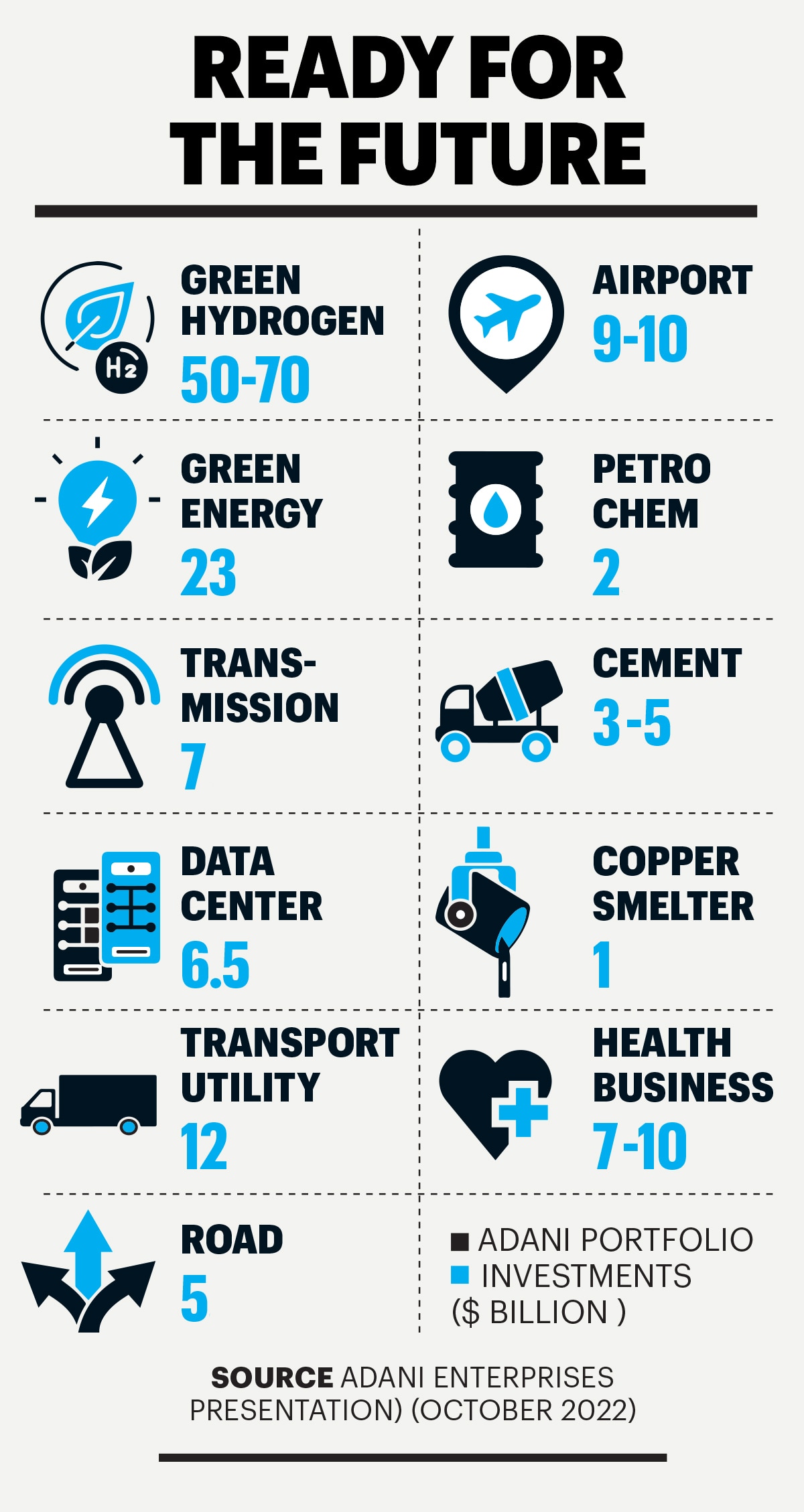 The biggest surprise from the Adani Group came in September, when it acquired two iconic cement brands—Ambuja Cements and ACC—for $6.5 billion from Swiss multinational Holcim. In one stroke, Adani has become the country’s second-largest cement manufacturer (after UltraTech) with a capacity of 67.5 MMT per year. The rationale for buying cement is simple. Energy and logistics costs constitute a major part of cement costs, and Adani has group synergies in power, ports and logistics. “The cement business will double in terms of Ebitda and cash flow even if they don’t tinker with the market price,” says a cement analyst. There is a huge runway for growth as India’s per capita consumption of cement is just 250 kg against China’s 1,600 kg. “Adani is not taking a big risk in setting up new businesses like cement. ACC-Ambuja is a proven company with solid management,” says Kishor Ostwal, Chairman of CNI Research. This September, Karan was given charge of the newly acquired business, which is the second big portfolio under his belt.

In the metals space, AEL is setting up an alumina and copper refinery with a billion dollars of investment in the near future. “The idea is to build a cost-competitive metals business backed by the group’s power and logistics strength,” explains Jugeshinder Singh, Group CFO.

Two decades ago, Gautam Adani entered the FMCG space with Adani Wilmar Ltd (AWL), a 50:50 joint venture with Singapore’s Wilmar. Gautam Adani’s nephew Pranav was the first second-generation family member to join the business in the late 1990s. Angshu Mallick, CEO, has been a part of the FMCG unit since its inception. Today, it has emerged as India’s biggest FMCG company with sales of Rs 54,214 crore, surpassing long-time market leader Hindustan Unilever’s (HUL) revenues of Rs 52,446 crore last year. AWL has now expanded to staples like wheat flour, rice, pulses, etc., after establishing a well-known brand of edible oil—Fortune—in the northern market. It pounced on the well-known Kohinoor brand of basmati rice this May. The company, with IPO funds of Rs 3,600 crore, is spreading its wings into semi-urban and rural areas, and also eyeing M&As.

Recently incubated is Adani Digital Labs (ADL), a D2C (direct to consumer) venture to develop a super app for consumer businesses. “We will be the Ferrari of the digital world,” announced Gautam Adani in a Chairman’s message. Nitin Sethi, with past stints with multiple start-ups, is spearheading the company’s foray into D2C as Chief Digital Officer-Consumer Business.

The Adani Group is creating the foundation for the next set of businesses. Adani is placing his bets in green hydrogen to replace traditional fuel sources. AEL has incubated Adani New Industries Ltd (ANIL), which is focussed on industrial decarbonisation, and where strategic investor TotalEnergies has taken a decision to pick up one-fourth of its equity. ANIL covers manufacturing of solar cells, wind turbines, generators, electrolysers, fuel cells, and production of green hydrogen. It is also foraying into downstream products like green ammonia, urea, methanol and ethanol.

AdaniConneX, a joint venture in the data space with US-headquartered EdgeConneX, was created last February to build 1 GW of data capacity over the next 10 years. It has already commissioned the first data centre of 17 MW in Chennai. AdaniConneX is building hyperscale campuses in over half a dozen big cities, all powered by renewable energy. This power intensive business is expected to start free cash flows from this year.

Adani Airport Holdings Ltd (AAHL), which is part of the group, got into the airports business two years ago with a portfolio of six brownfield airports. This year, it completed the acquisition of two more airports—Mumbai Airport and the greenfield Navi Mumbai Airport. Mumbai Airport, acquired from the GVK Group, is India’s second-busiest airport by both passenger and cargo traffic (after Delhi airport). AAHL is already the largest airports operator in the country with 25 per cent share of passenger traffic and 40 per cent share of air cargo. In 2021-22, it handled 36.9 million passengers, 320,000-plus air traffic movements and 665,000 MT cargo across seven operational airports. “We are nearly 90 per cent of the pre-Covid levels in terms of passenger and air traffic movement,” says a company executive. AAHL is giving final shape to its strategy of targeting non-aero revenues. The work at Navi Mumbai Airport is progressing well and the airport is expected to open by the second half of 2024. 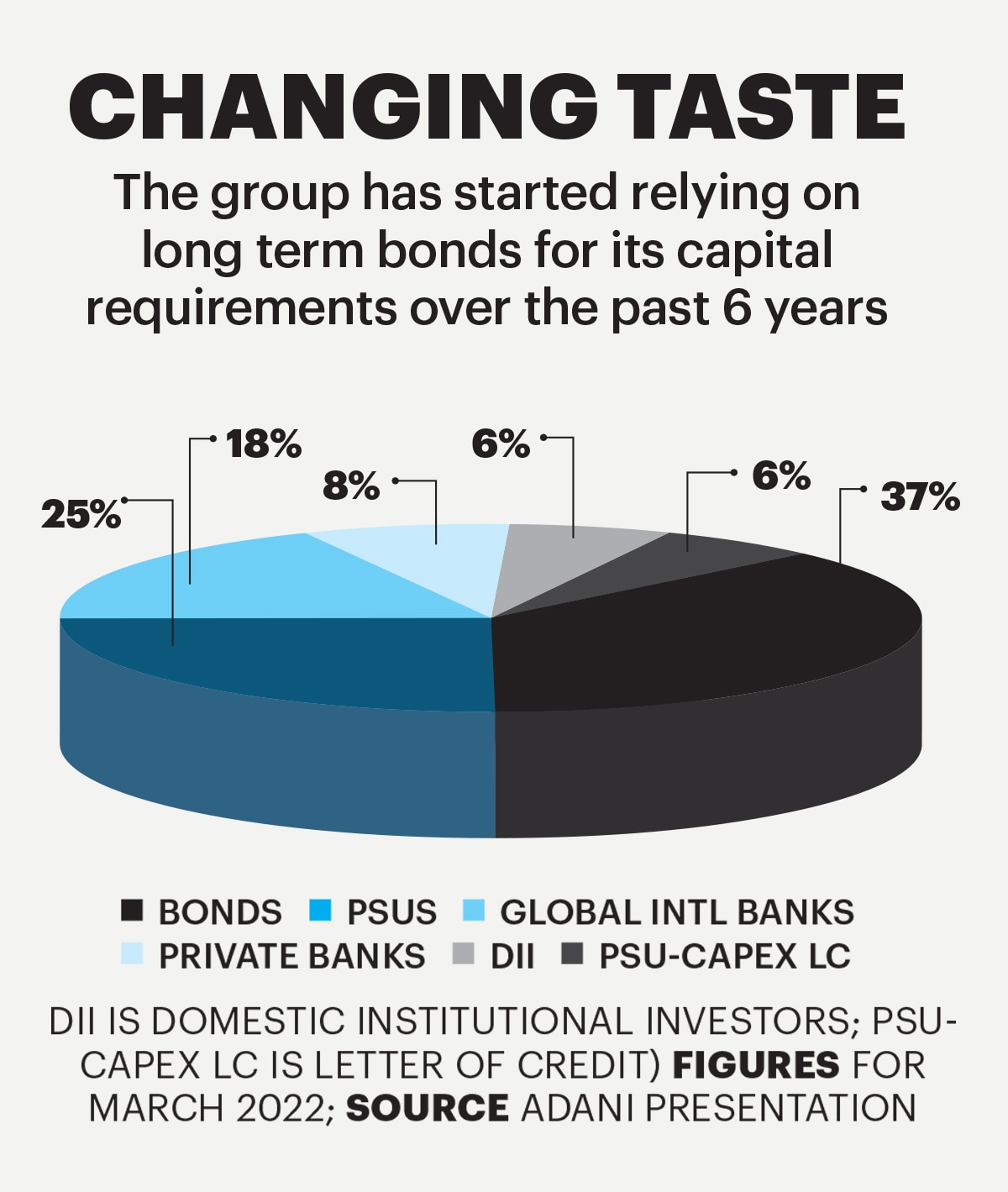 Read More: Inside The Colossal Empire Of Gautam Adani

FORTEC Elektronik Aktiengesellschaft with dynamic business development in the first