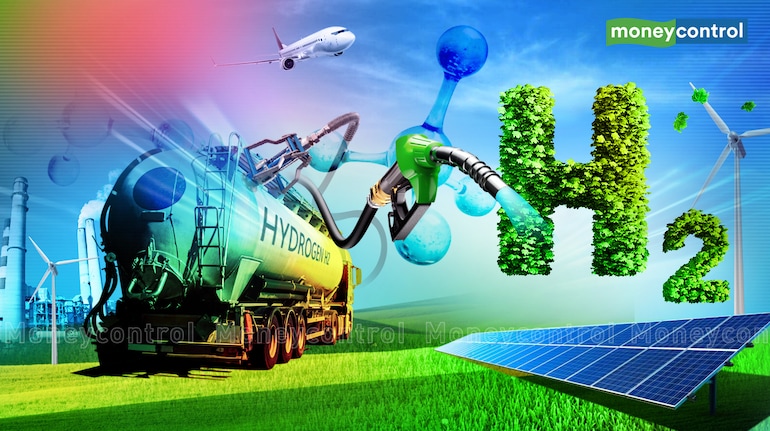 Green hydrogen as an emerging sector created a buzz at the UN climate summit in Egypt as the energy transition from fossil fuels gathers pace and the search for a viable non-carbon energy source intensifies.

The electricity generation sector has started making strides in transitioning to cleaner sources of energy through solar and wind, with India and China playing leading roles. However, there are industry sectors where greenhouse gas emissions are much harder to eliminate, such as steel mills, oil refineries and fertiliser plants.

“It is undeniable that a majority of the energy-intensive sectors will be in the global south in the coming years,” said Tareq Emtairah, director at the department of energy of the United Nations Industrial Development Organisation. “It will be a challenge to decarbonise some of these sectors, particularly iron and steel, fertilisers and oil refining.”

It is in this context that green hydrogen assumes importance if developing countries are to reduce their emission intensity while maintaining their economic growth momentum, experts said.

Green hydrogen is made by breaking down water in an electrolyser using renewable energy, which results in no carbon emissions. The hydrogen can then be combined with nitrogen to make ‘green’ ammonia, avoiding planet-warming hydrocarbons in the process. Green ammonia is used to store energy and make fertilisers.

“Green hydrogen can help reduce emissions from hard to abate sectors such as steel and fertilisers,” said Srinivas Krishnaswamy, chief executive officer at the Delhi-based Vasudha Foundation, an environmental think tank. “It can also help in greening long-haul freight and transportation.”

At Sharm El-Sheikh, India reiterated its intention to develop a green hydrogen ecosystem to lower emissions, among other long-held climate goals.

The global green hydrogen economy is still in its incipient stage, so India might have an early-mover advantage. Currently, the bulk of hydrogen produced in the world uses natural gas and is known as black hydrogen. There is also grey hydrogen made from low-carbon technologies, but its share in the global market is negligible.

“We must make a realistic assessment of the current green hydrogen situation,” said Noam Boussidan, platform curator on energy at the World Economic Forum, an international lobby group. “Green hydrogen is critical for global decarbonisation. Trucking, shipping and steel in particular will benefit for enhanced production of green hydrogen.”

The global green hydrogen market was valued at $1.83 billion in 2021, according to market researcher Precedence Research, and is expected to hit over $89.18 billion by 2030, expanding at a compound annual growth rate of 54 percent from 2021 to 2030. The Asia-Pacific region is the fastest growing area in the green hydrogen market, Precedence said.

India has set a target of an annual production capacity of 25 million tonnes by 2047. The number could well be revised upwards as the technology evolves and the demand outlook improves. India’s current output of green hydrogen is low and comes from a just handful of pilot projects.

By the end of this decade, the country wants to produce 5 million tonnes of green hydrogen. By 2030, India also plans to add 175GW capacity of green-hydrogen-based energy.

Although green hydrogen could be a viable way to cut carbon emissions, major challenges remain in scaling up the technology and making it cost-effective. It is also not certain demand will grow proportionately, experts said.

“If we are to have a robust market for green hydrogen, we need to generate demand from end users, especially public procurement for industries like steel and cement that are currently carbon-intensive,” said Emtairah.

Till hydrogen production becomes free of carbon emissions, industrial markets could also consider grey hydrogen made from low-carbon technologies, although it is considered problematic in environmental circles, according to Bernhard Lorentz, global leader of climate strategy at Deloitte, a consultancy. “There is still high risk in the sector and bankability of hydrogen projects is still an issue,” Lorentz said.

One way to increase the acceptability of green hydrogen initiatives among large lenders is certification, said Boussidan of UNIDO. “There could be separate benchmarks for green and grey hydrogen,” he suggested.

Developing nations have smelt an opportunity in green hydrogen as the cost of renewable energy, particularly solar, has become cheaper than coal-fired electricity in countries such as China and India, experts said.

Hydrogen produced with renewable energy costs between $3 and $6.55 per kg, compared with fossil-based hydrogen that costs about $1.80 per kg, according to the European Commission’s July 2020 hydrogen strategy paper. That could change rapidly in a few years as Indian conglomerates have announced massive investments to produce green hydrogen.

In India, the production cost of green hydrogen is around Rs 500 per kg, according to official sources. The government expects to reduce the cost of manufacturing by 40-50 percent through its policy initiatives.

“We really believe that in the next one decade, we will bring the cost of green hydrogen to a dollar per kilo and make sure that we transport and disburse it at less than a dollar per kilo thereafter,” Reliance Industries chairman Mukesh Ambani had said at the Asia Economic Dialogue event earlier this year.

Reliance Industries has said it will not only produce green hydrogen but also build factories to make electrolysers. It has announced a massive investment plan of $20 billion to be made in the next five to seven years. The conglomerate will build a 5,000-acre Dhirubhai Ambani Green Energy Giga Complex in Jamnagar, Gujarat, and giga factories for electrolysers, fuel cells, integrated solar photovoltaic modules and energy storage.

Other business houses have followed suit. State-run Indian Oil Corporation has said it will partner with clean energy producer ReNew Power and engineering giant Larsen & Toubro to produce green hydrogen. The country’s largest oil-marketing company will build a green hydrogen plant at its Mathura refinery in Uttar Pradesh, it said earlier this year.

The recent developments could see India emerging as a key base for hydrogen electrolyser production with 8GW capacity by 2025. The country’s pipeline of electrolyser factories puts it almost at a par with expected global capacity by the end of 2022, which is about 7GW, according to Bloomberg New Energy Finance.

Many of the investment plans come on the heels of government policies and promised incentives. The government is expected to allocate around Rs 6,000 crore each for its production-linked incentive schemes for electrolysers and green hydrogen from the country’s Rs 20,000-crore green hydrogen mission.

Indian companies are pushing hard to develop a local industry by tapping into the financial heft of local conglomerates and technical know-how from the Western world.

“It is still early days but given that big companies such as Reliance have announced investments and a number of startups such as Ohmium are coming up to manufacture electrolysers, I think India can produce a large amount of green hydrogen,” said Krishnaswamy of Vasudha Foundation.

Hydrogen could very well act as a disruptive force in the carbon-intensive industrial sector and may set the pace for India’s energy transition journey.

Disclaimer: Moneycontrol is a part of the Network18 group. Network18 is controlled by Independent Media Trust, of which Reliance Industries is the sole beneficiary.